Last week I had the opportunity to read Derek Swannson’s new novel Crash Gordon and the Revelations from Big Sur – here is le review! 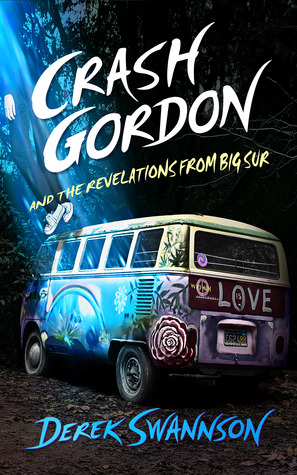 An amnesiac convalescing in Big Sur encounters an oddly sinister envoy from the Freemasons’ Scottish Rite Psychophrenic Research Program…. A stoned surfer trespassing on Hearst Castle property gets hauled up into the sky by a massive flying black triangle…. A notorious starlet attending the wrap party for her first major Hollywood movie assassinates a Moscow journalist with a bottle of radioactive nasal spray…. In Crash Gordon and the Revelations from Big Sur, Derek Swannson combines these elements into a comic and subversive international thriller.

OCTOBER 1988: It’s morning in America again. Ex-CIA Director George H. W. Bush is calling the shots as Vice President. Intelligence agency black budgets are on the rise. Ronald Reagan’s trickle-down economics has been trickling upon the American populace for nearly eight years. It’s been a non-stop champagne bash for the rich, who’ve become much richer, but for the middle class and the poor the trickling has acted like acidic piss, burning gaping holes in their social safety nets. Is the increase in suffering intentional? Gordon Swannson thinks so—and he has the metaphysics to prove it. Sort of.

Fresh from a five-year resident scholar program at the Esalen Institute, Gordon (“Crash” to his friends) arrives in the sleepy seaside town of Cambria, California, to deliver a lecture titled “Galactic Loosh Farming and Reaganomics: How Much Longer Before the Fabric of Reality is Ripped to Shreds?” It’s the start of a bizarre chain of events that will launch Gordon’s career as an investigative journalist and entangle him with a cast of characters that includes: James Marrsden, a gleefully foul-mouthed radio DJ and Gordon’s untrustworthy childhood best friend; Kayleigh Fuller, a stoner witch who happens to be the niece of Buckminster Fuller; Skeeze Lester Huntley, a porn-addicted surfer whose alien abduction inspired him to become the Dope King of Central California; Rina Rowley, a lovely young actress with a shockingly ugly past; and looming largest of all, James’ morbidly obese and obscenely wealthy Uncle Lloyd, “super secret black-ops bagman for the medico-military-occult complex… and matchmaker.”

Determined to uncover the truth behind Lloyd’s lurid tales of psychic killers and a mind control program known as Project MONARCH, Gordon chases down leads from Cambria to Amsterdam’s red-light district and the Brussels headquarters of an alien-inspired sex cult calling itself The OääD Institute—getting a profound education in the machinations behind the 20th century’s greatest unexplained mysteries along the way. Seeking the final piece to the puzzle, Gordon returns to his roots in the isolated, faux-Swedish town of Kingsburg, where those mysteries began. What he finds there will send him hurtling toward a climactic showdown against a naked assassin dead set on turning the Cold War into a hot mess.

CRASH GORDON and the Revelations from Big Sur is the big, shaggy conspiracy novel that everyone has always wanted to read—without actually knowing it. There’s a reason for that. They don’t want you to know about it.

You do know there’s a They, don’t you?

I always love a conspiracy theory novel and when it’s done well with unique twists and turns I become a fan—and Derek Swannson drew me in from the beginning. From the attention-grabbing cover to the illustrations that only led the story further, Crash Gordon and the Revelations from Big Sur was a novel I found difficult to put down.

The novel takes place in the late 80’s, during the years when Reagan ruled office. When Crash shows up in a small California coastal town to deliver a lecture, he’s able to add the title of “Investigative Journalist” to his résumé. He starts sticking his fingers in pies that a lot of people with the power to back them wished he would leave alone, including the very secretive Project MONARCH. Uncle Lloyd fuels the fires of the idea of government mind control and the possible truth of psychic killers. Without giving too much away, the story is filled with intense and revealing details, but not to the point where the reader feels overwhelmed with information.

Swannson has been able to find that fine balance between well-developed, strong characters—and the stories that accompany each one—without being swamped and inundated with unnecessary elements. Crash Gordon and the Revelations from Big Sur is full of conspiracy and suspense. Although tugging on elements from other genres, the novel definitely stands out on its own, providing an exciting read. The level of wit was pleasantly surprising and rare in this type of novel; I was left smiling and biting my nails, laughing and on the edge of my seat all at the same time. Swannson delivered a novel that quite possibly raises the bar.

Where to find Derek: