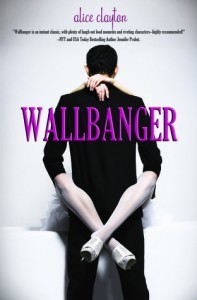 The first night after Caroline moves into her fantastic new San Francisco apartment, she realizes she’s gaining an intimate knowledge of her new neighbor’s nocturnal adventures. Thanks to paper-thin walls and the guy’s athletic prowess, she can hear not just his bed banging against the wall but the ecstatic response of what seems (as loud night after loud night goes by) like an endless parade of women. And since Caroline is currently on a self-imposed dating hiatus, and her neighbor is clearly lethally attractive to women, she finds her fantasies keep her awake even longer than the noise. So when the wallbanging threatens to literally bounce her out of bed, Caroline, clad in sexual frustration and a pink baby-doll nightie, confronts Simon Parker, her heard-but-never-seen neighbor. The tension between them is as thick as the walls are thin, and the results just as mixed. Suddenly, Caroline is finding she may have discovered a whole new definition of neighborly…

In a delicious mix of silly and steamy, Alice Clayton dishes out a hot and hilarious tale of exasperation at first sight…

Alice Clayton sure knows how to write a great romance.

I was loaned this novel by a friend who told me I HAD to read this book and was thoroughly introduced to Ms. Clayton – and the Wallbanger.

I am a huge fan of happy ever afters but when I can laugh out loud and get my happy ending – well… what’s better than that?
Alice Clayton provided a strong story line with even stronger characters involved in a witty friendship turned romance. I loved how we got to know the secondary characters in the book, only adding to the overall experience.

When Caroline moves into her boss’s old apartment she can’t help her excitement which soon diminishes after hearing her noisy next door neighbors – ahem, nightly activities. After keeping her up for nights she finally has had enough and storms over to confront him. After some harsh words and another encounter where they realize they share some of the same friends, they call a truce, forming one of their own with a main goal of hooking up their friends together. A couple dinners later, some laugh out loud witty banter, a weekend in Tahoe followed by some heavy embarrassment eventually leads to a steamy trip to Spain and hot and delicious evolution from a friendship to romance.

As much as I was entranced by the relationship development between Caroline and Simon I found myself actually laughing out loud which kept my eyes glued to the pages as I read the story in one go.

“And then, I went for it.
Dr. Ross. Third season of ER, after the Caesar haircut had been rectified. Mmmm….”

The novel was funny and sarcastic, romantic and sexy and I loved every minute of it. The characters were real, including Mr. Clive, and riveting, the story was an easy one to read with a lot of fun thrown into the mix. I’m looking forward to reading more from Alice Clayton!

Alice Clayton is a novelist with an unholy love for her KitchenAid mixer. Making her home in St Louis, she enjoys gardening but not weeding, baking but not cleaning up afterwards, and is trying desperately to get her long time boyfriend to make her an honest woman. Hi sweetie!!

After working for years in the cosmetics industry as a makeup artist, esthetician, and national educator for a major cosmetics company, Alice picked up a pen (read laptop) for the first time at 33 to begin a new career, writer. Combining her love of storytelling with a sense of silly, she was shocked and awed to be nominated for a Goodreads Author award in 2010 for her debut novels, The Redhead Series.

Alice has penned three novels, The Unidentified Redhead,The Redhead Revealed, and coming soon in November 2012, Wallbanger. She thinks you should purchase them immediately. She’s not kidding, not even a little bit. Everyone needs some comedic erotica in their lives. She is hard at work on the third book in The Redhead Series, set to release in Spring of 2013, continuing the saucy and sexual escapades of everyone’s favorite couple, Jack and Grace.

Additionally, Alice loves spending time with her besties on Not Your Mother’s Podcast, make sure you check them out at notyourmotherspodcast.com or over on iTunes. 3 women rushing towards their forties still acting like teenagers. A saucy little mix of sex, love, relationships, pop cultural, celebrity gossip and All Things Jake Ryan.

Finally Alice would also like all her readers and listeners to help her convince Mt. Alice that the only other thing that would make her truly happy is finally bringing home a Bernese Mountain Dog. She is totally serious. And done talking about herself in the third person…

Where to find Alice: