In a city of lies and deception, only one thing stands between chaos and justice. For centuries, a band of outlaws called the Amaranthine has kept the peace in Ormere and hidden in plain sight whilst the Order of Sorcerers spreads their deadly magic among the city’s inhabitants.
After losing her fiancé in bust gone wrong, Amaranthine Agent Kaylan Avilion returns home to discover that Elijah didn’t die but instead was changed by the twisted guards of the Order, who seek to find a dangerous artifact tied to Kaylan’s past and the murder of her family. When her sister goes missing and a foe from their past reemerges, Kaylan knows she must save Freya before she’s poisoned by the very people who took Elijah away from her. But how will Kaylan react when she learns Elijah’s secret and can they come together to stop the Order’s plan in time?

Darkness is sweeping through the city of Ormere as unnatural creatures stalk through the streets. People are dying and time is running out as a new evil threatens to take control of everything. The Amaranthine Order has been decimated leaving only a few of its people left to fight the coming terror.
Stunned by her sister Freya’s betrayal and plot to take over the city, Kaylan must do everything she can to find out what Freya plans to do when she finds an infamous book linked to the murder of their family. A book considered so dangerous that the last High Lord erased its location from history, the Amaranthine Chronicles are said to contain the darkest of all magics.
Kaylan is happy to finally have her ex-fiancé, Elijah, back in her life but he’s not the man she once knew and loved. After being turned into a shapeshifter, Elijah struggles to control his inner beast and his lingering feelings for Kaylan.
Can Elijah and Kaylan come together to stop Freya and uncover the secrets of the book before it’s too late?

Darkness has claimed the city of Ormere and death has become a certainty for anyone stalking its empty streets. The government in ruins and lawlessness ensues.
After being dragged back into the past, Kaylan and Elijah barely managed to thwart her sister, Freya’s latest attempts to find and use the elusive Amaranthine Chronicles. But in her desperation to receive ultimate power, Freya will stop at nothing to get what she wants. Even if it means destroying the last of her family.
Kaylan and Elijah must work on their fragile relationship and put their personal feelings aside to find the book and stop Freya before it’s too late. But with their allies growing thin, their best friends both injured and a gang of ruthless shapeshifters close on their trail, will they finally find the book and stop Freya before time runs out? And will Kaylan have to make the ultimate sacrifice to save her city and the man she loves? 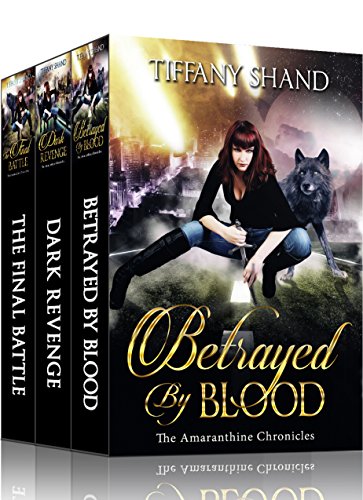 I was a fan of Tiffany Shand’s first series, Denai Bound and I wasn’t disappointed with this series at all.
I read all three one right after the other; the novels definitely read more as parts of one whole novel as opposed to three separate which I found myself enjoying as each flowed nicely into the next.
Shand never disappoints when it comes to suspenseful paranormal; I do wish that each novel built a little more on the characters and this world filled with good vs evil, magic, alchemy, and the tug of rope love story simply because I was so drawn in I wanted to know more.
There were some small editing/grammatical errors however were small compared to the overall body of the story.
I love a story where the female lead is a strong on, a woman who can hold her own, and Kaylan Avilion is a woman with a backbone.
I enjoyed how the suspense level remained relatively linear throughout each novel, starting with the return of Kaylan and her reunion with Ethan as her sister goes missing and then in the 2nd novel when the truth comes to light and the search for a book that is a vessel holding dark magic fuels a greed for power and finally in the third when the fight between family and sacrifice, good vs shapeshifters and the ultimate fight for happily ever after.
A capturing and thoroughly enjoyable series from the start.