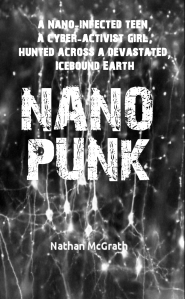 Two teenagers in a perilous chase across a devastated, Icebound Earth.
Alister, a teen with uncanny hacking abilities, discovers his sister, the last of his family is alive, kidnapped, and sets off to find her. When Suzie, a feisty cyber-militant curious about the secret behind Alister’s exceptional skills, gets involved in his search, the wrong kind of people start to notice. It’s not long before MI6 and a ruthless Private Military Corporation want them dead or alive.

What readers have said:
“Sit back and enjoy the rip-roaring plot”
“Pacey and compelling.”
“smart and sharp.”