Veronica’s werewolf tattoos mark her as the mate of two sexy insatiable alphas, Rafe and Slade, identical dark-haired hunks. Together their powers and their pleasures are amplified. They teach her when to control her inner wolf and when to let it run free. Veronica wants to tell her friends everything only she fears they won’t be able to handle the truth that she is a werewolf. And even if they can adapt to the reality that the supernatural world exists, will they accept that she loves both men? Whether they find out or not may be out of her hands. The full moon is rising and danger is closer to her friends than she realizes. Danger is no problem for Rafe and Slade. They are virtually invincible. The only thing stronger than their power together is their love for Veronica. When she gets an ominous warning that their bond will endanger everyone, she would rather kill the messenger of this bleak prophecy than give it any credence. The girl with the werewolf tattoo won’t let anything separate her from her gorgeous blue-eyed alphas. Not fate. Not fear. Not even death. 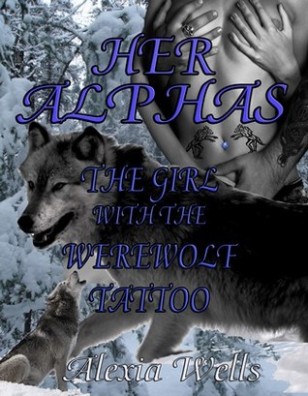 I enjoyed book two in this series much more than I did book 1. I thought the length of the book was great for the story with not as many fast paced parts to the story. In book 2 the characters evolve and we learn more about Veronica and her relationship with Slade and Rafe. All of the secondary characters from book 1 make an appearance and I was surprised by some of the turns they took. I thought the role of Bernadette was intriguing although I must admit I was a little confused at times but I think her role in the story will be revealed in book 3. The one thing that threw me was the role of Tasha, and without giving anything away I will say as the novel progressed I got used to it and found myself more intrigued than wondering why is this happening? I thought the action scenes in this novel were full of detail and wonderfully portrayed which kept me wanting to read more. The erotic scenes in this book were just as well done as the first, full of hot, sexy steam – Wells knows how to write erotic while keeping the romance which I think is a wonderful skill to possess.

I found this novel to be more captivating than the first, enough to have me wondering what is going to happen in the next.